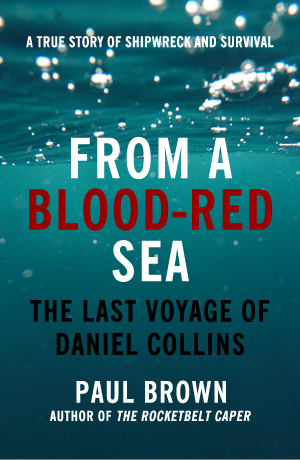 Daniel Collins sailed out of Wiscasset, Maine, for Matanzas, Cuba, in November 1824. It was his first voyage as a merchant seaman, and it would also be his last. His ship, the Betsey, was wrecked in a terrible storm, and Collins and his crewmates were left adrift in a leaking lifeboat, in shark-infested waters, a hundred miles from land.

After a torturous few days with no water or provisions, they reached a remote island, where they were brutally attacked by a savage band of pirates. Collins was horribly injured, but he escaped, alone, through water “colored with blood”. Then, with astonishing courage and determination, Collins began an epic journey across land and sea in a desperate effort to escape from the pirates, to reach civilization, and to find a way home.

From A Blood-Red Sea: The Last Voyage of Daniel Collins is the new book by Paul Brown, author of Messages from the Sea. A non-fiction historical survival adventure, it’s recommended for fans of The Revenant and In the Heart of the Sea. It’s available as an Amazon Kindle eBook, a 99p / 99c “Single Shot” (longer than a magazine article, shorter than a full-length book, 12,000 words = approx. 70 mins reading time).